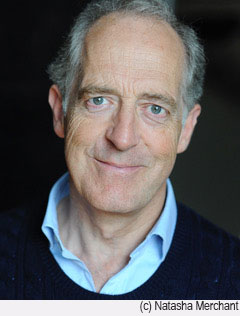 Tim Bartholomew (www.timbartholomew.co.uk) is both a writer and actor, appearing most famously in TV commercials as Santa Claus for Marks & Spencer (2016) and the benign old Grandpa for Asda in their 2017 Christmas campaign.

Writing under the name Timothy Edward, his first comedy novel with “rude” bits, Lessons in Humiliation, received the following accolade from his old Dad: “Well, you’ve either had an unusual sex life or a very vivid imagination.” In point of fact, the reviewer was right on both counts.

Tim has also recorded the book for Amazon/Audible. At 10 hours 38 minutes, it makes ideal listening for long car journeys or flights. He is looking forward to recording Body Language too.

As they say in theatre programme credits, Tim has appeared on stage and screen for nearly twenty-five years, being cast normally as a benign old buffer, Captain Hook, a drag queen or a mad professor. According to one casting director, “it’s all about your rolling eyeballs, darling.” These days, however, Tim is aware that it’s all about his wrinkles: that lived-in face that earns him money for having fun in exotic locations.

In a varied career, Tim has also been an academic publisher, illustrator, music teacher, a payroll clerk and, in recent decades, a voice coach and Head of Drama at a mad school in Southern England. He draws material for his books from both his professional life, his own improbable experiences and, of course, family holidays.

Slave to Beauty: The Complete Trilogy